24 Company responses
6 Customer testimonials
Call customer care
Write a review
Holborn is a global wealth management company, with head offices in Dubai, UAE. Recognized as the favoured Financial Services Company in the UAE, Holborn has been known for employing a client-centric approach to ensuring future financial stability to customers and their beneficiaries. Engineered to deliver premium quality service and advice to clients, Holborn helps ensure that the client will have money put in the right place at the most appropriate time. Delivering flawless execution of various financial planning and management services, Holborn Dubai caters to the 80% UAE expat population. The company observes a firm set of business principles to provide its roster of services with complete integrity and respect for all. Without overstepping boundaries, Holborn advisors adhere to a strong business concept that helps them provide the highest standards of financial planning while adhering to established international standards.
Show
AdSome advertisers may pay us for this ad to appear on our website or provide us with a referral fee. Our content is free because we may earn a commission if you purchase products after clicking ads on our website.

Holborn Assets - Lost me 40k in a pension transfer and I work in finance!

We do our utmost to provide clients with the very best service and support. If for any reason you have a query or concern, we urge you to go direct to our customer service team who will help to rectify any issues quickly and efficiently. Visit our website for contact details.
author's review
ID
#520274 Review #520274 is a subjective opinion of poster.
Loss
$60000
Aug 10, 2014 User520274

Daylight robbery, don't go anywhere near them. They put me into commission driven products and funds that were high risk and high commission paying.

Bob the owner is Ex RAF and supposedly a devote christian, he should be ashamed of himself. They have never responded to complaint or even consider what they have done with my hard earned money. DONT NOT USE THEM or DEVERE they are as bad as each other.

I was put into the IQS 17,000gbp this promptly lost me 12k gbp and I had to pay exit charges based on the original which they wont pay back to me. I was put into a generali personal portfolio bond which is not a suitable pension investment account due to high transaction fees, high commissions paid to the *** bag IFA and they dont seem to care as well.

They are up for sale and need to show as much revenue as possible so the owners can disappear into retirement. I heard the biggest are buying them out and soon all their guys will work for the one true broker in the market just like the Acuma boys (RIP LOL).

As they say in highlander...there can be only one and soon they will be under our control.

I am sure we can get some standards in you to prevent *** like the above...

AdSome advertisers may pay us for this ad to appear on our website or provide us with a referral fee. Our content is free because we may earn a commission if you purchase products after clicking ads on our website. 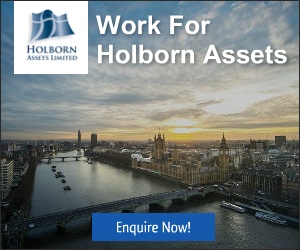 We deliver investments from some of the world’s largest investment houses which often deliver bank beating returns to our clients. Should you have any queries or concerns, please contact our customer service department who are always on hand to help.
author's review
ID
#474072 Review #474072 is a subjective opinion of poster.
Feb 03, 2014 Thunder

I asked this company holorn assets in dubai and was advised by a welsh person called aywyn owens to take out a 20 year savings plan with a company called Friends Provident international. I told him that i had just moved to dubai from the uk to work for emaar i was only on a short term contract.

i tried to contact alwyn and holborn assets to stop the plan but was advised i could not or i would loose all my money. i had paid in just over 36,000 dollars. i eventually got hold of the owner of the company a chap called Bob Parker who simply said there is nothing he can de.

i have been ripped off and alwyn and lost the money i would have had while working in dubai. stay well clear of hoborn assets in dubai they are *** men

unless it's someone you personally know or is recommended from a trustworthy friend, don't give your money to complete strangers, all of you deserve what you got, dummies

He took his £5500 set up fee, continued to receive annual commissions and left my investment to rot! Total negligence!!

This is the same alwyn owens that was jailed for 6 months for dealing drugs in the England. Google Alwyn Owens jailed and up it comes...

This takes the biscuit even for Dubai IFA - what results do you really expect.

Would that be the same Alwyn Owens given six months for being a drug dealer?

Any company that employees a convicted drug dealer should carry a health warning. Even by Dubai IFA standards this really does take the biscuit.

This might sound obvious but DO NOT GIVE YOUR MONEY TO CONVICTED FELLONS OR COMPANIES THAT EMPLOY THEM.

I completely agree with the original poster. Holborn assets are a greedy bunch of *** men.

I found them through an online search for financial advice for expats. I am British but living in Bulgaria. They advised me to put a large amount of money in various bonds with Friends Provident International. Another truly awful company.

So I did. I was completely mis-sold the policy, the costs were not properly explained, I never received paperwork, any follow up, any original documents and when I wanted to cash in some of the funds there were so many *** ups it was unbelievable. Then one of the main investments turned out to be a complete fraud and scam (one of Peter Drake in Australia's cons).

All Holborn Assets were interested in were the commissions. I have written and made official complaints, all ignored.

I See Holborn Assets LLC is based in Israel.

Having been involved in offshore financial services in Hong Kong over a large number of years, I baulk at the obviouse tactics of so called professionals slandering the names of their competitors to try and gain points by posting such utter rubbish. I would much rather see financial consultants concentrating on their clients needs and investments than taking time to rubbish the industry they pretend to represent as professionals.

I am not suggesting for 1 minute that there are not some genuine complaints on this ridiculously unregulated web site.

But by allowing totally anonymous posts and holding absolutely no one responsible for their actions is simply negligent and irresponsible. All companies from Walmart to the dry cleaners in your local town will receive complaints at one time or another, and then the person with the complaint goes to the supplier to sort it out.

If the supplier does not deal with it in a professional manner post on sites like this and get the truth out there, of course give the post the credibility it deserves by using your real name. By doing this gripe sites like this will become a valuable resource and stop all this in fighting between ex employees and competing companies.

Thank You for Your Submission